At the Boot exhibition in Düsseldorf, Absolute stands out once again for its innovation and astonishing novelties and this time, beauty and elegance merge with Hollywood glitters.

On September 2013, Absolute was proud of the success obtained from the debut of the first 5 yachts of the “Absolute generation 2014” and of the customers and press open appreciation. However, this year, Absolute has not lost the chance to surprise the nautical world once again.

At the Messe boat show the model Absolute 45STY, the soul mate of the 45FLY, the ultimate yacht novelty, made her first appearance.

This brand new project shares the same structures and systems engineered for her sister “Absolute 45 FLY”. However, the STY-Sport Yacht version- implements the stunning Webasto hard-top to bewitch you with the maximum ability to unveil shining sun, blue skies and sparkling stars at night.

The greatest surprise came for sure from the new Absolute movie, where action, suspense and Hollywood stars were mixed on board of one of the seven sisters. The huge success of public and social media gave to the Italian Shipyard from Piacenza an important visibility, underlining the central role played by production facilities where Absolute yachts are forged and by technologies and structural characteristics of the Absolute motor yachts, both elements that place Absolute yachts among the highest quality yachts’ producers worldwide. 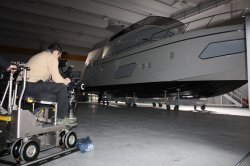 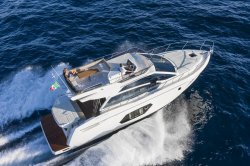 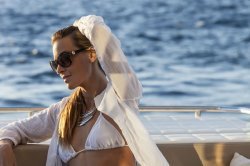